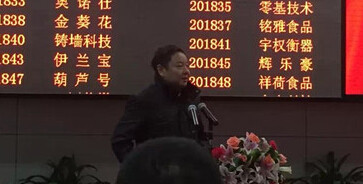 It is reported that the ceremony for the capital of Chu Cheng recently the second special listing ceremony, last November, capital of Chu Cheng had also high specification listing ceremony held in five successful sponsor of the enterprises. Among them, sponsored by the capital of Chu Cheng Shanghai Taylor Burton diamond Co., Ltd. (hereinafter referred to as enterprises: the Taylor Burton, stock code: 202857) financing effect is prominent, in listing after just 5 days, successful fund-raising 100 million yuan and in the second round of fund-raising achieve economies of scale 600 million yuan RMB of directional additional financing. It is reported that Chu Cheng capital reason to in a short period of time to achieve the success of a number of companies listing, and the sponsor companies listed on the reason why there is a good financing effect, is mainly due to the sponsor capital Chucheng based on the rich society and the investment community resources based on. Therefore, before and after the massive financing counseling work. The Taylor Burton as an example, from financing scheme design and implementation to roadshow training, organization and guidance and on amendments to the specific financing and contract text, Chu Cheng capital and its general manager, the sponsor representative Mr. Li Houhai I have done a lot of in-depth and meticulous work.

Another business characteristics of the capital of Chu Cheng advocates that provide sustained long-term services, capital operation mechanism of the enterprise, specific performance for to from an early age that is involved in the development of enterprises, help enterprises in the OTC market started, to the standardized and efficient guidance accelerated growth companies until reached so far in the global mainstream capital market IPO motherboard. Recent (January 2015), Mr. Li Houhai, Chu Cheng, general manager of capital was invited to attend the Asia Financial Forum organized by the Hong Kong Trade Development Council after and intensive visits to the stock exchange of Hong Kong, the Hong Kong Monetary Authority, Hong Kong listed the relevant regulatory authorities, that is, to pave the way for listed in overseas project execution.

Mr. Li Houhai, Chu Cheng, general manager of capital said the company to OTC market business started, the ultimate goal of the development is committed to through the capital and management to help, help of excellent Chinese enterprises to enter the international capital market, promote innovation and growth of enterprises, and promote the integration of industrial and social development. And thus become a valuable, respected, and has the international influence of innovative investment bank.